RainsweptButterfly is a sleek, glossy and short furred Black cat with a lilac flower or bramble crown and icy dark blue eyes. She has long cheek fur, a tuft of fur on her head the swoops downward and a long, fluffy tail.

Raisweptbutterfly is a warrior of LagoonClan under the leadership of Winterstar. She previously was a SwampClan warrior who had served under Yewstar and Nightstar. She was born as Rainswept'kit to Eclipsefrost and Jadedripple alongside her siblings Stormkit, Eaglekit and Angelkit. She and Stormkit were named after a rainstorm that had swept away camp and clanmates. Unfortunately Eaglekit did not make it long after birth and her family was heartbroken. She was apprenticed to Sweetspirit and earned her apprentice name of Rainswept'paw. She wasn't the best at everything and often got jealous of her siblings, something that she regrets. She could never take criticism and often argued with her mentor, but Sweetspirit was VERY patient. She ended up failing her first final assessment and even when she passed the ceremony was held back because of her childish behavior.

With enough focus and help with her behavior she earned her warrior’s name, Rainswept'Butterfly for her grace and brutal honesty. Her life went on normally for the most part with her doing patrols and what-not. She mentored Stratuswind and later went on to mentor Tigerpaw. She was smart and caught up to her training very fast but unfortunately lost his life in a border patrol defending the territory from WitheredClan[NPC].

After a while there a clan meeting was held to announce that WitheredClan has allied with them, which confused most of the clan. She went for the gatherings that took place but stayed distrustful of the Clan. War ensued later on and the clans lost both leaders and she lost her father. She grieved for a very long time. The new leaders from both clans soon settled for peace and harmony, with WitheredClan leaving behind their bloodthirsty ways. She soon left to become a rouge keeping her warrior name.

Rainswept'butterfly is a big she-cat with short but thick glossy and sleek night-black Russian fur. She has luminescent and intimidating icy Chetwode blue eyes that are wide-set and rounded and takes pride in it. She is gracefully thin, lithe and has cobweb soft fur that is neatly groomed. She has a sturdy build and is broad shouldered. Her tail is very long and thin and her head is adorned with a thin Lilac flower crown and sometimes a bramble crown. She has a tuft of fur on her head that swoops downwards and extra cheek fur that appears longer than her usual fur. She has a long fluffy tail.

Rainswept'Butterfly excels when being around other cats so it's natural for her to feel a sense of leadership around them and knows better than to be bossy as she believes that it isn't right to do so. She is rather proficient at hunting being able to track prey better than most. She she enjoys swimming and practiced it though not as much because the water there was rather poor-quality. She may not be the brightest bulb in the chandelier or capable of defending herself properly she is a fair climber and seems rather slow. She is very stable both mentally and physically and hates herbs so much that she doesn't know anything about it.

Rainswept’Butterfly is a very naively enthusiastic and perseverant, something that was rooted from childhood with her nature to be Jealous. Usually, she gets jealous when someone she’s close with make’s progress because she wants to be on par with them and compares herself with them and is known be very self-critical and disapproving of herself. Her proud nature can often make her butt heads with other cat’s ideas and tends to argue quite a bit and grows impatient with that certain cat.

She is extroverted and shines around being other cats and seems to radiate a huge level of a natural sense of leadership and Charisma. She tends to be very brutally honest and sarcastic staying aloof to what others seem to think of her when she says something honest. She is a very graceful cat, walking like as if she’s on clouds and can be picky on what she eats. She is bold and partly daring but due to her age she tends to make a bit of a fuss. With her sense of leadership, comes and unambitious side to her. She does not like pressure and would rather take things at her own pace even when she was an apprentice.

Rainswept’kit was born into a litter of 4 consisting of her, Eaglekit, Angelkit and Stormkit during a disastrous rainstorm that swept away clanmates and wrecked the camp.

Yewstar lost his 2nd last life to this the rainstorm. Sometime after this a bout of greenchough plagued camp and eaglekit lost his life. The entire family grieved for their lost brother and son.

She played with her other siblings and after the loss of Eaglekit her parents seemed overprotective.

A new deputy was appointed. Nightspeckle was to become leader after Yewstar.

She made friends with Quietkit and Whitekit and became jealous of the attention Angelkit was getting due to her beauty.

Seeing this Quietkit and Whitekit made her the first flower crown she ever wore, a lilac and bramble crown.

They gave her compliments that seemed to make her gain confidence.

She was often picky with what she eats as she finds a few pieces of food taste bad.

WitheredClan decides to help SwampClan though the clear reasons are unknown. SwampClanner's stay distrustful of the rivalling clan.
-Apprenticeship

At 6 moons she and her siblings were made apprentices with the names: Rainswept’paw, Angelpaw and Stormpaw

The newly named apprentice had Sweetspirit as her mentor.

She seemed unmotivated and lazy when it came to learning but again got jealous of her siblings for doing better than her.

Sweetspirit tried to give her constructive criticism, but she did not want to hear it and often argued saying that she did it her way and her way was right.

Soon the time for her apprenticeship was coming to an end and she failed her first final assessment while her siblings passed.

Stormpaw decided to keep his apprentice’s name for the sake of her sister not feeling left behind, which made her feel angry and guilty.

By this time Whitekit and Quietkit had been apprenticed. Again, they helped her though this time she felt like she didn’t need them.

She told them to focus on their training and that she’d do it herself.

Yewstar had lost his last life to Nightspeckle. Nightstar had then rose to leadership, making Eclipsefrost his deputy.

The fact that her friends and siblings were better than her in almost everything she became very self-critical.

WitheredClan caused a bit of a problem during this time by stealing prey and attacking patrols and demanding for a part of SwampClan territory as WitheredClan had helped them during the flood and was continuously tuned down.

Having enough of staying an apprentice she focused and accepted help from her friends she passed her 3rd attempt at the assessment. Though at this time she seemed very critical of her own mistakes.
-Warriorhood

Nightstar gave her the name of Rainswept'Butterfly for her Grace, Perseverance and Honesty though she felt like a dissapontment for getting her warrior name so late.

Soon after she mentored her first apprentice, Stratuswind. He didn't seem to take a liking to her due to the fact that she ecame a warrior so late.

there were soon small border skirmishes taking place and Nightstar lost his 3 of his lives during that time.

Another bought of an unknown illness swept the camp and took his 4th life.

By this time she'd managed to gain her second apprentice Tigerpaw.

The clan overcame the bout of sickness and SwampClan and WitheredClan made an allegiance which confused both clans.

They had meetings and everything seemed fine as they came to a resolution about the land.

Again WitheredClan stirred up trouble and attacked her patrol and managed to kill Tigerpaw and Rainswept'Butterfly grieved.

With Tigerpaw's death Nightstar waged war against the opposing Clan and it was horrible.

After this new leaders emerged and they had an Era of Peace.

Rainswept'Butterfly left SwampClan to live off on her own not wanting to be free of the warrior code. Though she kept warrior name.

Yewstar: Sweetspirit, you are ready to take on an apprentice. You had received excellent training from Aspenthicket, and you have shown yourself to be patient and wise. You will be the mentor of Rainswept’paw, and I expect you to pass on all you know to Rainswept’paw.

Nightstar: I, Nightstar, leader of SwampClan, call upon my warrior ancestors to look down on this apprentice. She has trained hard to understand the ways of your noble code, and I commend them to you as a warrior in their turn.

Nightstar: Rainswept’paw, do you promise to uphold the warrior code and to protect and defend your Clan, even at the cost of your life?

Nightstar: Then by the powers of StarClan, I give you your warrior name. Rainswept’paw, from this moment on you will be known as Rainswept’Butterfly. StarClan honours your Grace, Perseverance and Honesty and we welcome you as a full warrior of SwampClan.

Thoughts on other cats

Base by Griwi. Colored and edited by me 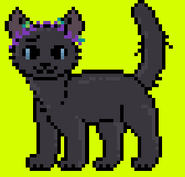 Base by Illigur. Colored by Localoof4 why cant i stop making accounts 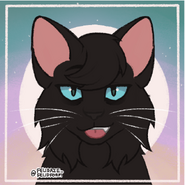 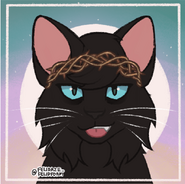 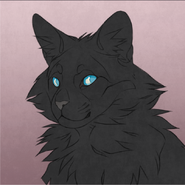 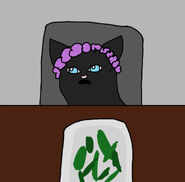 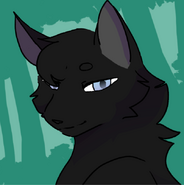 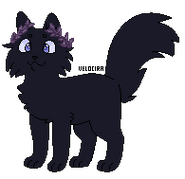 Base by Velocira on Da Filled by Kyrieva on the wiki

This Format was coded by Fadingskies and IS NOT f2u under any circumstances. If seen being used please contact Here.

Community content is available under CC-BY-SA unless otherwise noted.
Advertisement